Our first DC Adventure was a combination of “Let’s introduce the characters, the system, and have a bit of a beat-em-up.”  Since I didn’t know what characters the players would choose, I made the game open, but linear.  The players would A, be introduced to each other, B, conduct an interview with the media, then, C, be called off to action against a bunch of baddies, and leave a hint of an ongoing plot brewing.

It would be nice if the first adventure lead us directly into a second one, but I like how the bad guys getting away seeds a plot much further on.  That means that we’re starting from scratch again, and we can’t have the same story format twice.

Enter “Gimmicks & Gadgets: Mutants and Masterminds Adventures“.  While DC Adventures doesn’t have a lot of support yet, the game it was sired from, Mutants and Masterminds, has been around the block a few times and there are 12 pdf adventures at Green Ronin’s website.  I made a quick scan, and found that the first one listed, Bad Medicine, was appropriate given a DC Comics update, so off we went.

Our heroes wake up on the 99th floor of Lexcorp Tower and have a chance to freshen up and interact before Mercy Graves approaches them with today’s field mission.  Mercy dumps a handful of patches on the table and informs everyone that what we’re looking at are ‘slappers’.  Slappers are a new party drug that has hit the streets of Metropolis, and, is likely manufactured in Metropolis since there’s been no reports of it in any other city.  This $500 a patch drug is slapped at the base of the neck, where a cocktail of Venom (the deadly drug previously used by the man who broke Batman’s back: Bane) is absorbed into the bloodstream.  The effect is immediate:  The users muscles and veins bulge and they are wracked by an increase in durability and strength.  There’s also a savage surge of testosterone, turning the user into a violent animal.  Mercy warns the group that they need to be very careful with these samples, since slappers are not only dangerous, but highly addictive.  That’s when Harley Quinn slapped one on the back of her and Person Man’s necks.

Harley Quinn turned into a violent, bubbly, hammer-smacking machine.  Our ‘heroes’ couldn’t pin her down until Abra Kadabra placed a spell, turning Harley into a giraffe with leaden mallets for appendages, weighing her down until the drug ran it’s course.  Strangely, the drug seemed to have a reverse effect on Person Man, removing his ‘powers’ and making him sound intelligent for a short period of time.

‘Bad Medicine’ leaves this leg of the adventure open-ended.  It assume that the players will probably hit a night club, they will talk to someone, and that someone will send them to the drug lab.  Since I was afraid the adventure would have terrible timing, leaving us stranded in the middle of the final fight when we called it a night, I extended this space and gave the players a chance to be creative.  Instead of going to one location, the players would need to go to multiple locations all fed to them from the previous one.  The link between the locations would either be accidently established by the players or off the top of my head, and, to make sure I didn’t get stuck, I made a list of seven possible locations that the investigation could have lead to.

Our own group decided to first visit Metropolis University, to see what they could find out from the campus druggies (Not a bad idea, and one I didn’t think of).  The students weren’t forthcoming with a pack of superheroes on the subject, but Booster Gold used his enhanced hearing to pick up a conversation at the other side of the Quad about the conversation the heroes were having, and didn’t your friend, Pete know someone who dealt in that sort of thing?

After confronted by Booster, the students said they knew a dance club downtown where the drugs were sold.  The players went to the club, but, since it was still 11 in the morning, Hourman summoned his gigantic time machine, ushered everyone inside, and the players traveled to 11 o’clock the previous evening.

While Abra Kadabra magicked the club into ‘Club Kadabra’ forcing a hypnotized entourage who grew wax mustaches to dance, the very naive Hourman was asking, very openly, about slappers.  A good looking woman in her late thirties approached him and told him that she was dealing in the back of the club.  When they got back there, though, she slammed Hourman against a wall, and handcuffed him.  The officer, Maggie Sawyer, was requesting backup from her men in the Special Crimes Unit when Harley Quinn (strangely) explained Hourman out of cuffs.  Officer Sawyer berated Hourman and Harley and warned them to leave this sort of work to real detectives. 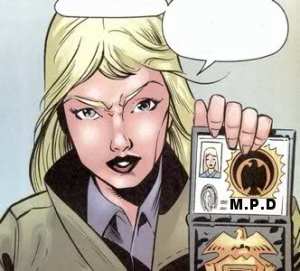 Meanwhile, Booster had found that, while one of the girls he was talking to didn’t know where he could find slappers, that she had a friend in the hospital because of the dangerous drug.  Booster made a quick flight to the hospital, and asked the receiving nurse if there was anyone in the building detoxing from Venom.  The nurse explained that that was confidential information, then asked Booster if he was really him?  Green Lantern?  Booster pretended to be Green Lantern (to a cheering hospital ward), and the nurse decided that if it helped the Justice League, then she wasn’t going to get in the way.  The girl could be found in room 512.  The girl in 512 told Booster that you could get Slappers in Gorilla Town.  She didn’t really know which Gorilla was the one that sold her slappers, though (“All Gorillas look the same to me,” she said.)

Gorilla Town is my own invention.  Since there are so many talking gorillas in the DC Universe, including an entire Gorilla City in Africa, I figured that a number of them would migrate to a borough in the U.S., and why not Metropolis?  When the players go to Gorilla town, they’re told they need approval from Gorilla Boss (a Batman gangster boss.  No, really.) who had moved up from Gotham and was the Don of Gorilla Town. 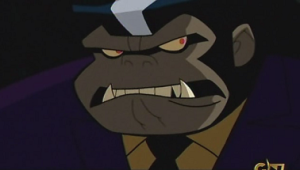 The players are ushered through a butcher shop, which holds a swinging twenties-style speak easy and casino, run by gorillas in zoot suits and with gorilla flappers dancing and taking drinks.  After talking to Gorilla Boss, and doing a favor for him (roughing up a human who had been chasing after the gorilla girls in town), Gorilla Boss let the party know where they could find the warehouse.

The heroes stormed the warehouse, and found a full laboratory in operation.  White Rabbit, one of Steel’s old villains, ordered the scientists to apply slappers and protect the product.  Team Lex fought their way through beefed up pawns as another group of scientists, who knew better than to inject Venom, threw dangerous chemicals at the players from behind a table…. some of which caught fire when exposed to air, and later in the fight, cascaded into a number of other explosive chemicals.

After the chemical fire was put out, White Rabbit revealed that Thomas Weston and she had served their 5 years for selling Toastmaster guns to gang members and were let out of prison on good behavior.  In the intervening years, AmerTek had moved out of weapons, and into pharmaceuticals.  AmerTek did okay without their old executive and liaison, but, facing bankruptcy, turned the reigns over to Weston in hopes that he could save the company.  He did, by illegally selling slappers to party-goers at exorbitant prices.  Team Lex may have taken out his lab, but unless they do something about Weston, he’s bound to set up another one, and restart operations.