In Bad Medicine, Part 1, the players, after much investigation, shut down an illegal drug processing center, and found the man responsible for putting Venom on the street as a party drug is one Thomas Weston.  Mr. Weston was the original CEO of Amertek, was caught selling Super-tech Toastmaster guns to kids in street gangs, did time, and was back at his old game with old contacts and a new product.  Our questionable heroes may have taken out his processing center, but unless they tagged Weston, he was bound to restart his lucrative operation somewhere else.

All this the players knew.  What was happening behind the scenes, however, was that another team of ‘heroes’, the Secret Six, was also hot on Weston’s trail.  Bane and his crew were working hard to find Weston and wipe him off the underworld map.

Bane is the man who broke Batman’s back in the now classic series:  Knightfall.  He combines both brawn and intelligence in one lethal package, and when his strength is augmented with the drug Venom, he can be nigh unstoppable at getting what he wants.  Venom, though, is a terrible, addictive drug that was forced on Bane when he was a prisoner in a Santa Prisca gulag.  Bane spent years kicking his addiction to Venom, and withdrawal from the drug haunts him daily.  He’s made it his personal goal to take vengeance on the drug that stole his life, and works to stamp it out where ever he finds it. 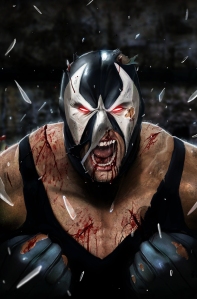 So while the crew was going from location to location tracking where the Venom came from, I selected a few locations in my mind where the players could run into the Secret Six conducting their own investigation into Venom.  Team Lex never crossed paths with the Six however, made good time, and beat the Six to the illegal processing plant.  The Secret Six arrived late to a fight that they had no need to get involved in, and found out from stragglers outside the plant that Thomas Weston was the man responsible for putting Venom on the street.  The Six couldn’t beat Team Lex to Weston’s apartment, since they knew Abra Kadabra could teleport his team there, so they improvised.  Scandal Savage split the team, with a number set to cause a distraction, while the rest of the team greeted Weston at his apartment.

So, when Team Lex learned all they needed to know about Weston, they got this message from Calculator: 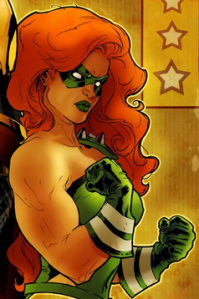 “Everyone, drop what you’re doing.  Reports from Metropolis police scanners say Knockout has punched her way into the First Bank of Metropolis.  Lex and I knew, with Superman out of the picture, that some of his former sparring partners would cut in on the scene… but this is brazen, even for Knockout.  Either way, this is great news.  Go in there, take Knockout down and let the cameras see what you’re doing.  Excellent publicity.  Don’t storm her all at once.  We want something we can post on the website, and a no-fight isn’t exciting.”

(For those that are interested, you can find Knockout’s stats in The DC Adventures Quick Start Guide at Green Ronin’s website.  There’s also Superboy in there, if you need him for something.)

The players are teleported to the First Bank of Metropolis, have some complications with the Metropolis Special Crimes Unit, and find Knockout in the vault, ripping the place apart.  Harley Quinn, for reasons only known to Harley, slaps a venom patch on Knockout, making her even more dangerous, and shooting up her testosterone levels so that she can no longer be reasoned with.  As the players are dealing with Knockout, they get another update from Calculator:

“Guys, I’m sorry to interrupt while you’re working hard, but we got a bigger fish to fry.  Jeannette, one of the Secret Six is… she’s in banshee form.  She’s in the middle of New Troy and is killing people.  You’ve got to get some people there now!”

The party is now split in two locations dealing with two threats.  Jeannette in Banshee form is difficult to stop  (Team Lex is PL10.  Knockout is PL12, and I set Jeannette to PL14 for the purpose of this encounter.  You can see her character sheet here.)  while the bulk of the team has been pulled to deal with her, the fight with Knockout turns bad.  Knockout lands a solid punch on Harley, launching her through the wall of the bank, on the roof of a police car, passed out with stars circling her head.  Knockout  then goes toe to toe with Heatwave, trying to smash his head into one of the lockboxes.  The large group, however, finishes off Jeannette, teleports back to the bank, and Abra Kadabra teleports Knockout into the stratosphere.

Booster Gold flies up and catches Knockout as she reenters the atmosphere, but by this point ten minutes has passed and the Venom is no longer in Knockout’s system.  Knockout lets slip that her and Jeannette were a distraction, and that while Team Lex was dealing with them, the rest of the Six was visiting Weston at his high rise apartment.  The team commandeers a vehicle, and Booster Gold picks it up, flying the team off to Weston’s apartment.  When they get there, though, they find a man-sized hole in the glass and multiple sets of cat-claw grappling hooks.  The players track the Six to the roof of another apartment building and down to the main lobby, where a doorman informs Team Lex that a masquerade party jumped into a white van and was heading down the thoroughfare, out of Metropolis.

Team Lex flew over the thoroughfare in their commandeered vehicle when Booster spots a white van travelling the Metro-Narrows Bridge.  Booster flies Team Lex’s car alongside the white van, and the team realizes they got lucky when they see the man driving the van has a harlequin mask on.  Harley makes casual conversation with Ragdoll across lanes (to see Ragdoll’s character sheet, click here), but when Booster lifts both vehicles into the air, Ragdoll alerts the rest of the Six.

A battle rages between the Secret Six and Team Lex between and on top of two vehicles flying hundreds of feet above Hobb’s River.  Things look bad for the Six, so Scandal dives out the back of the van with a tied up Weston in her arms.  Before they hit the Hobb’s, though, Abra Kadabra teleports himself and Weston, and they splash into a pool inside the Lexcorp Towers’ gym.  Meanwhile, realizing that no one in the Secret Six can fly, Booster drops both vehicles into the Hobb’s and grabs Harley and Heatwave as they fall past.

Continue on to DC Adventures Log 4: Before I Kill You, Mr. Aquaman…