Two Books – At the Mountains of Madness: A Graphic Novel and Jack of Fables, vol. 8: The Fulminate Blade

Fantasy.  If there’s one thing that these two books drip, it is far flung ideas that define and rejoice in the strange.  For “The Fulminate Blade”, the fantastic is a source of whimsy, and, for “At the Mountains of Madness”, the fantastic is a source of terror.  Both books seek to reach beyond the curtains of the world we live in, pluck what lies beyond and frame it. 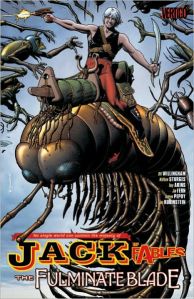 Jack of Fables, volume 8: The Fulminate Blade, written by Bill Willingham and Matthew Sturges with art by Tony Akins is a complete departure from the main story arc.  It tosses Jack Horner out of his own book, along with Jack’s supporting cast, and focuses exclusively on Jack Frost, son of Horner, a naive hero living in a world where feudalism meets laser guns.  Nearing the end of his run on Jack of Fables, it’s like Bill Willingham and Matthew Sturges grew tired of their usual protagonist, the conniving bastard you love to hate: Jack Horner.  Horner forces those he squares against to be either nasty villains bent on control, or personifications of true evil.  Without Horner in his own book, suddenly we’re tossed into a tale of alchemy, space elevators, power blades and magical talking owls.  The world isn’t vindictive, but wondrous, as seen through the eyes of a young Jack Frost, with a touch of help from the imaginative stylings of Edgar Rice Boroughs.

How odd, then, that, in the same journey to my local library, I happened to pick up “At the Mountains of Madness: A Graphic Novel”, adapted and illustrated by I.N.J. Culbard.  By chance, I had two different author’s interpretations of the beginning of the fantasy genre.  At the Mountains of Madness is one of H.P. Lovecraft’s seminal works, tying together much of his mythos into a scientific expedition and arctic adventure which, by accident, unearths terrifying evidence that we are very small in the face of our universe.  Instead of an homage, however, Culbard is tasked with the very difficult job of boiling down a novella into a graphic novel.  He does so through very liberal use of dashes – reducing large swaths of text to a simple line.  Instead of Lovecraft’s twisting turns of phrase to percolate the mind of the reader, Culbard lets his art deliver mood, while the basic plot of the story remains intact.

That’s quite the trick.  In Two Books:  ‘Tale of Sand’ and ‘The League of Extraordinary Gentleman, Century 1910‘, I mentioned that, when I read a graphic novel, I’m here for the story, not the art.  In order for me to appreciate the art, it needs to be impossible to tell the story without it.  The art must convey volumes of emotion, endemic to the narration, to the point that extracting it and replacing it with, say, stick figures, would destroy the story in question.  Culbard does an excellent job of fusing Lovecraft’s words with his art.  This doesn’t feel like art for the sake of making a story easier to follow; there is a definite sense that Lovecraft’s original work is made better because of the art.

Culbard, however, is trapped by his subject matter.  I know I’ll lose geek cred for saying this, but a lot of Lovecraft’s work is just silly.  I mean, have you taken a good look at Cthulhu?  Culbard uses the common imagery of Cthulhu, and his sharp lines lend to cartoonery.  Other Lovecraft horrors get similar treatments… they suffer from Culbard’s beautiful vivid style of solid swooshing lines, which while it lends well to drawing ice drifts, men, dogs and buildings, it could use a lot more abstraction when dealing with the unknowable.  Or, instead, I would have also accepted an interpretation of the creatures based upon Culbard’s art style, and not based on the culturally accepted standard.

Don’t read too much into that diatribe, though.  I’m only coming down hard on one aspect of Culbard’s interpretation because his work is solid; this is only a minor criticism.  It’s a beautiful book, and it isn’t fair to compare it to what is intended to be a throw-away story in the Jack of Fables universe.  The Fulminate Blade couldn’t possibly outbox this book.  The two books aren’t even in the same division.  The question I’d pose to The Fuliminate Blade, however, is “Do the fantastic elements of Jack Frost’s story achieve the same level of fascination that Lovecraft’s arctic expedition holds?”

Willingham/Sturges hit a lot of beats with their story, presenting a number of twisting plot elements and bringing their own touch of strange science to the workbench.  We get odd glimpses into the contrast of magic and science.  In one scene, specifically, The King’s Alchemist dissects an animated wooden owl, ignoring the owl’s pleas that he was carved from a tree in a magical grove.  The alchemist doesn’t care what the owl has to say… he assumes there must be some science behind this and is willing to carve his way to the truth.  We don’t need many scenes like this to establish the sort of world we’re in, how it functions and what to expect from it.  Willingham/Sturges, however, give us very little to work with.  People ride giant centipedes, swing swords and shoot lasers.  Kingdoms have access to fabulous technology, but the houses that people live in represent medieval Europe.  The story infers a fall from technological grace, but, according to the narration, took place a long time ago relative to our own time.

If the author is attempting to create a fascinating world where anything can happen, should we expect an explanation as to why things happen the way that they do?  Maybe not always, but most times, I think we should.  I don’t want to give off the impression that I ‘don’t get’ what the authors are going for.  I understand their desire to both entertain and flummox their audience using classic fantasy conventions.  But, like a good detective novel, I think the author fails some if the reader can’t piece together why things happened the way they did after the fact.  Confound your audience – sure.  But leave some hint as to why you chose to tell your story this way.  After all, Edgar Rice Burroughs may have been off his rocker with some of the crazy sciences he imagined, but everything had an internal logic.  When Burroughs went forward and introduced new crazy inventions, you didn’t need to question it:  you trusted that the author had his reasons, and accepted it until something resembling an explanation was provided. In The Fulminate Blade, the plot is great, and every strange thing that happens has a point.  Is it too much to ask for the world it takes place in to stand up to the same standards as the plot?

In the end, The Fulminate Blade is a good book (with a great plot for Dungeon Masters looking to steal some ideas), but it can’t stand up to At the Mountains of Madness, or, for that matter, many other volumes of The Fables series.  Read it because you’ve read Jack of Fables volumes 1-7 and plan to read 8 to get to volume 9.  Either way, pick up At the Mountains of Madness.  It’s one of those books that, when you put it down, will stick with you.

Posted in Two Books and tagged At the Mountains of Madness, Bill Willingham, I.N.J. Culbard, Jack of Fables, The Fulminate Blade

One thought on “Two Books – At the Mountains of Madness: A Graphic Novel and Jack of Fables, vol. 8: The Fulminate Blade”